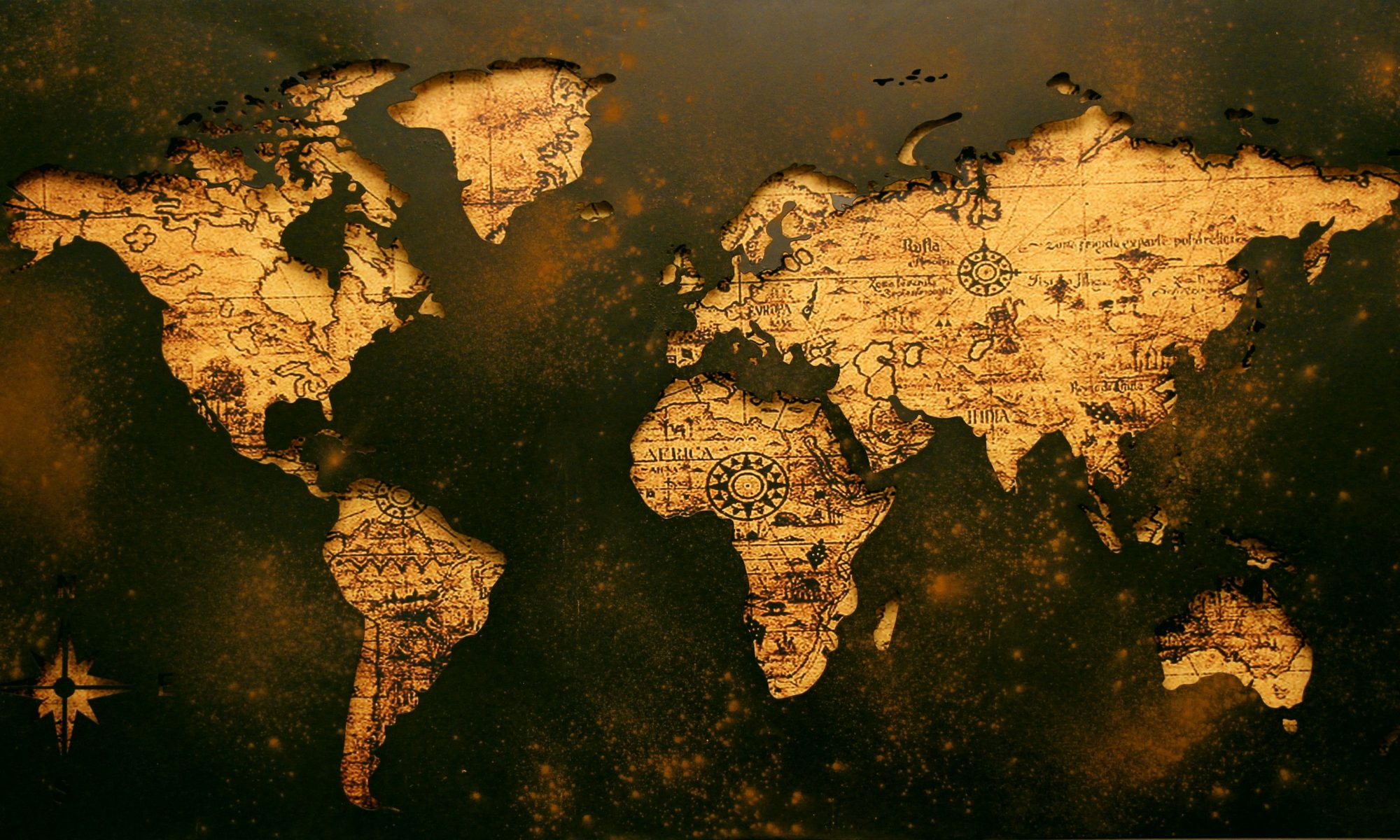 He presented himself alive to them after his suffering by many proofs, appearing to them during forty days and speaking about the kingdom of God…So when they had come together, they asked him, “Lord, will you at this time restore the kingdom to Israel?” He said to them, “It is not for you to know times or seasons that the Father has fixed by his own authority. But you will receive power when the Holy Spirit has come upon you, and you will be my witnesses in Jerusalem and in all Judea and Samaria, and to the end of the earth.” – Acts 1:3,6-8

Have you ever wondered where you fit into the story of the Bible? Has that story seemed disjointed and too complicated to follow? How can I relate to all the wild things we read in the Old Testament? What is God doing right now?

If so, you’re not alone. Seeing the Bible as a unified story is something I’ve struggled with for a long time. I mean, the New Testament is difficult enough anyway, why try to add the seemingly enormous complexity of the Old Testament to that?

I’ve recently gone through a study by an author I follow that shed a tremendous light on a significant unifying thread throughout the whole of Scripture—the gospel of God’s Kingdom.

Let’s start in Acts. Jesus has resurrected from the grave and is about to ascend into Heaven to sit at the right hand of God. He tells his disciples that they will receive the Holy Spirit, and they will be his witnesses in Jerusalem, all Judea and Samaria, and to the end of the earth (Acts 1:8). Highlight that part in your Bibles…

Then the day of Pentecost arrived. A “wind” (which is the Greek equivalent to the Hebrew word “Ruah” meaning spirit, wind, or breath) filled the whole house (Acts 2:2). Divided tongues represented by fire rested on each of the disciples (Acts 2:3), and they began to speak in other languages so that Jews from every nation under heaven could understand them (Acts 2:4-5). They were bewildered because they could understand these men in their own tongues (Acts 2:6). People from Parthia, Media, Elam, Mesopotamia, Judea, Cappadocia, Pontus, Asia, Phrygia, Pamphylia, Egypt, Libya, Rome, Crete, Arabia—all were amazed and wondered “What does this mean?” (Acts 2:9-12).

To get the full picture, let’s go back to Genesis.

God created the earth and he dwelt with his chosen people in the perfection of the Garden of Eden. Then the people there rebelled and took authority into their own hands. They were banished from the garden. Evil corrupted the population to such a degree that in Genesis 6, God is faced with no choice but to start all over again to establish His Kingdom. He chose a man and his family who he would use to usher that Kingdom into the new world (Genesis 6:1-8).

When the waters receded, God gave Noah the same commission he had first given Adam and Eve—“Be fruitful and multiply”—and even reminded him that God made man in His image (Genesis 9:1-7).

But it didn’t take long for things to go awry again. The descendants of Noah’s son Ham are the perpetual antagonists throughout the Old Testament. Ham brought the evil that God wiped out with the flood right back into the new world. Again, this evil culminates into a colossal event that is recorded in Genesis 11—the Tower of Babel.

The story starts off sounding really quite positive—people from the whole earth had one language and were united in one purpose. Except that purpose was born of the same evil root that caused Adam and Eve to rebel against God—the desire to make a name for themselves instead of living under God’s authority.

God again is faced with a difficult choice about how to handle the corruption in the human race. He confused their languages and scattered those people all over the face of the earth; exactly what they were trying to avoid (Gen 11:4, 11:8-9).

Genesis 10 is a record of what all those nations and languages were and then Genesis 11 tells how they came to be. Depending on the manuscript, there are 70-72 different nations described in this “Table of Nations” record.

Right after this account, we have God calling Abraham (Genesis 12:1-3). Just like with Adam and Eve and with Noah, God establishes a covenant with Abraham. He will make him exceedingly fruitful; the father of many nations (Gen 17:4-8).

So, God divided the nations of the world up and established a new nation just for himself. He didn’t destroy the others like he did in Noah’s day. He disinherited them. He gave them over. But to who?

When the Most High gave to the nations their inheritance, when he divided mankind, he fixed the borders of the peoples according to the number of the sons of God. But the Lord’s portion is his people, Jacob his allotted heritage. – Deuteronomy 32:8-9

But drama unfolds again. The heavenly hosts ruling the nations also rebel against God. Just like Adam and Eve, they wanted to be in the place of God himself, so they seek worship and allegiance. They become the false gods of the nations that we read about throughout the Scripture.

Paul makes it clear in 1 Corinthians 10:20-22 that the false gods of the world are truly spiritual entities, demons ruling over the world. Paul again in Ephesian 6:12 reminds us that our struggle isn’t physical, but rather against the “cosmic powers over this present darkness, against the spiritual forces of evil in the heavenly places.”

In the apocalyptic book of Daniel, the archangel Michael is said to be fighting against the prince of Persia and the prince of Greece (Daniel 10:20-21). These aren’t human princes! They are the celestial powers over those nations.

This was mind-blowing to me. Where did I think the false gods came from before? I guess I thought someone just imagined something and then somehow convinced a lot of people to go along with their imagination. But it’s much more potent than anything we as humans could come up with. So potent that God warned Israel over and over not to be influenced by the other nations of the world and not to follow their gods.

And beware lest you raise your eyes to heaven, and when you see the sun and the moon and the stars, all the host of heaven, you be drawn away and bow down to them and serve them, things that the Lord your God has allotted to all the peoples under the whole heaven. But the Lord has taken you and brought you out of the iron furnace, out of Egypt, to be a people of his own inheritance, as you are this day. – Deuteronomy 4:19-20

Israel was God’s inheritance. He allotted those celestial beings to the other nations, not to Israel. They were His!

What is God to do? He’s dealing with rebellious people and spiritual beings. In Psalm 82, we see God is presiding over his heavenly court. He doesn’t withhold judgment from these spiritual beings (2 Peter 2:4). Because they have revolted against God, he decrees that they will be stripped of their immortality (Psalm 82:6-7). More importantly, it is declared that God will one day re-inherit ALL the nations (Psalm 82:8). He will reunite those who were scattered.

Seeing the connection yet to our Acts passage?

Remember how many nations are recorded in the Table of Nations in Genesis 10?

How many disciples does your Bible say Jesus sent out in Luke 10?

This was a rescue mission. This was a RECLAMATION of the scattered nations. Jesus was announcing the coming of God’s Kingdom—reclaiming people under the dominion of the fallen celestial powers and bringing them back under the authority of Almighty God. God was re-inheriting the nations just as he said he would. Isaiah 66 was being fulfilled (Isaiah 66:18-23). All authority in heaven and on earth was being given to Jesus—he was sending his disciples out to all nations to reclaim them for His Kingdom (Matthew 28:18-20).

The reclamation has begun. God is laying claim on the nations again after handing them over to the heavenly hosts at the Tower of Babel. The gospel of God’s Kingdom is going out. Jesus started it in Mark 1:14-15, passed it on to his disciples, and it continues today!

And this gospel of the kingdom will be proclaimed throughout the whole world as a testimony to all nations, and then the end will come. – Matthew 24:14

Why? Why does God want to re-inherit the nations? So we can all go to Heaven when we die? It’s so much more than that… He wants to deliver us from the dominion of darkness and transfer us to the Kingdom of His Son! (Colossians 1:13). He wants to set us free from the power of the evil one. He wants to break us free from bondage. He loves us so much that he gave his only son in order to accomplish this! Never has John 3:16-17 had so much meaning.

So, what’s happening in Acts? Babel is being reversed!

At the Tower of Babel, the people were dispersed and divided. In Acts 2, these many people are being brought together. Languages were made different and people were confused at the Tower of Babel. Now a miraculous utterance and understanding of different tongues removes that confusion and places a whole new bewilderment on the people. The Spirit of God comes down on them like fire and signals that there’s a new temple and a new Kingdom in place now.

Jesus said the gospel of the Kingdom would go out from Jerusalem, to Judea and Samaria, and to the end of the earth.

Acts is a record of that very thing.

Paul takes the message and heads west, to the end of the earth. In Romans 15:22-24, Paul tells the church there that he will be passing through Rome on his way to Spain. In the Table of Nations, what is the most westward nation recorded? Tarshish. And what is Tarshish today? Spain! Paul is carrying out God’s plan to re-inherit the nations.

In Romans 11:25-27, Paul says that when the full number of the Gentiles has heard the gospel of the Kingdom and God has reclaimed the nations, then the end will come. All of us who are disciples of Jesus are part of this global reclaiming of the nations that God has been doing since Jesus sent out the 70!

We are part of Jesus’ promised inheritance. By his blood, he ransomed the people of all nations and is regathering the scattered of Babel (Revelation 5:9, Revelation 7:9).

“And to him was given dominion and glory and a kingdom, that all peoples, nations, and languages should serve him; his dominion is an everlasting dominion, which shall not pass away, and his kingdom one that shall not be destroyed.” – Daniel 7:14

“But you are a chosen race, a royal priesthood, a holy nation, a people for his own possession, that you may proclaim the excellencies of him who called you out of darkness into his marvelous light. Once you were not a people, but now you are God’s people; once you had not received mercy, but now you have received mercy.” – 1 Peter 2:9-10